With over 500 titles in print and 15 million copies in circulation, Roger Emerson is one of the most widely performed choral composers in America today. He received his degree in Music Education from Southern Oregon University and served as music specialist for 12 years in the Mt. Shasta Public School system. He concluded his teaching career at the College of the Siskiyous, also in Northern California, and now devotes full time to composing, arranging and consulting. Roger is known for creating "songs kids love to sing," and has written such best sellers as First, We Must Be Friends, Sinner Man and Shoshone Love Song. His educational arrangements include We Are The World, The Greatest Love of All and My Best Friend's Wedding, as well as some of the most successful Broadway and commercial titles in the industry, including Disney's Little Mermaid, Beauty and The Beast and Seasons of Love from RENT. For 12 years running, Roger has been awarded ASCAP's (American Society of Composers, Authors and Publishers) Standard Award, as well as performances of his works at The Kennedy Center, The White House and Carnegie Hall. Roger is constantly in demand as a lecturer on popular choral music and has addressed major music education groups including MENC (Music Educators National Conference), CMEA (California Music Educators Association), TMEA (Texas Music Educators Association), ICDA (Iowa Choral Directors Association), OMEA (Ohio Music Educators Association) and NYSSMA (New York State School Music Association). Roger currently resides in Mt. Shasta, California with his wife Mari and daughters Cassie and Kayla. 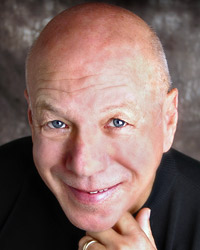