George Stone has enjoyed a substantial career in music performance, composition, arranging and education for 30 years. He is the Director of Audio Technology and teaches Music Theory and Composition at Cuesta College in San Luis Obispo, CA.

Born and raised in Newhall, CA, George was a product of the strong local music programs and teachers of the Santa Clarita Valley.  He received his degrees from Cal State University Northridge where he was a member of the renowned Jazz A-Band for whom he wrote extensively. By age 21 he was directing his own Los Angeles big band and writing for live shows and television.

Some artists and groups with whom he has been privileged to work include Doc Severinson, Dave Grusin, Tom Scott, Jack Jones, Chris Vadala, Jeff Babko, Bobby Shew, Donny McCaslin, Dave Tull, Luis Bonilla, Maynard Ferguson, Wayne Bergeron, Bob McChesney, Larry Koonse and Ron Jones.  He has composed and arranged for NBC, HBO, Warner Brothers, Steve Wynn and Disney. He is also the composer of the most famous MIDI song of all time, “Trip Through the Grand Canyon” (Canyon.Mid) that was released on over 66 million copies of Microsoft Windows.

George has appeared as guest composer/conductor at colleges and universities throughout the world. He has adjudicated literally hundreds of jazz festivals in the United States and is commissioned regularly by high school, college and professional bands to compose new music for jazz ensemble. He performs regularly on trumpet and piano, with compositions and arrangements released through publishers worldwide. His CD entitled “The Real Deal” features his music performed by the greatest Los Angeles players who currently comprise his big band. 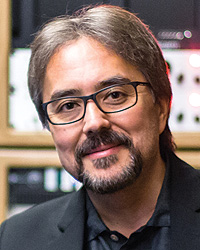