Born in Hartford, Connecticut, Mr. Osterling (1926-2005) began his musical career as a professional pianist at age 14, accompanying and arranging music for several dance bands in the Hartford area. He continued his musical studies at Ithaca College, the University of Connecticut, and the Hartt College of Music, specializing in Music Education.

As director of music in the Portland (CT) Public Schools for 34 years, Mr. Osterling became widely recognized for his contributions as a music educator. His high school band was in constant demand for conventions at the state, regional, and national levels, and was considered one of the finest bands in the East. Later, his teaching career led him to Florida Southern College, where he taught for 6 years.

As a composer and arranger, Eric's extensive background as a music educator made him particularly aware of the specific needs of bands at all levels, and throughout his career he faithfully and continually provided them with challenging and satisfying works. An ASCAP award-winning writer, his concert marches and band arrangements are widely performed by school and college bands across the country. 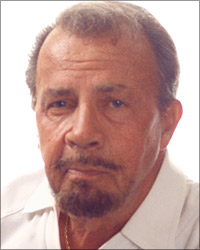