Born in Los Angeles on October 18, 1932, John Biggs received his Masters degree in composition from the University of California at Los Angeles, doing further study at the University of Southern California and the Royal Flemish Conservatory in Antwerp, Belgium. His teachers include Roy Harris, Lukas Foss, Ingolf Dahl, Flor Peeters, Halsey Stevens, and Leonard Stein. As an educator, he has taught at Los Angeles City College, UCLA, and UC Berkeley. He also served as composer-in-residence to six colleges in Kansas under a grant from the Department of Health, Education, and Welfare. As a performer, he founded the John Biggs Consort, which toured internationally under Columbia Artists Management, specializing in medieval, renaissance, and 20th century music. As a composer, he has won numerous awards and honors including a Rockefeller Grant, Fulbright Grant, Atwater-Kent Award, ASCAP “Serious Music Award” every year since 1974, and a number of “Meet the Composer” grants from diverse parts of the United States. 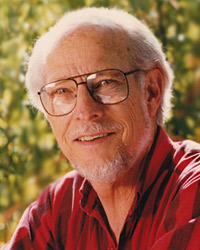