James Pethel, born December 24, 1936, in Gainesville, Georgia, was the Distinguished Composer-in-Residence and Associate Professor of Music at Carson-Newman College in Jefferson City, Tennessee for 37 years His undergraduate work was at Carson-Newman where he majored in organ and music education. As an NDEA scholarship recipient in 1960, he received his master's degree and did doctoral studies in music composition and theory at George Peabody College in Nashville where he was a student of Phillip Slates and Arnold Salop in composition. At Peabody his organ teachers included Scott Withrow, Sam Bate Owens, and Peter Fyfe. At North Texas State University, he studied organ with Don Willing and Charles Brown. While active at Carson-Newman as a member of the Music Department, Mr. Pethel taught organ, piano, composition, and theory. In addition to his recital work at C-N and churches, he also has served as organist in several churches. Also, Mr. Pethel has served as the sight-singing adjudicator for state vocal and choral association festivals in Tennessee for many years. A regular winner of ASCAP's Standard Award for significant creative work writing and publishing music since 1985, he has had over 250 titles published by 17 major publishing houses and has written several commissioned works including a choral work for the Governor's School for the Arts in l988. His favorite medium for writing is the organ, but he also writes and publishes for the piano, solo instruments, solo voice, and chorus as well. Mr. Pethel has been the nominee for Tennessee's Composer of the Year by music organizations in both Knoxville and Greenville, Tennessee. He was selected by Carson-Newman to receive the Outstanding Alumni Award in 1996. Also, he was honored by the Knoxville chapter of the American Guild of Organists with their Meritorious Award in recognition of his contributions to that organization and his musical activities and achievements as a composer in the field of music. In addition to being a freelance composer, Pethel enjoys photography, swimming, hiking, and collecting interesting toys. 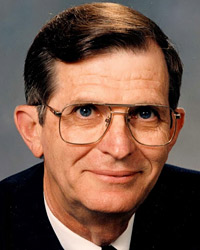