More than one hundred of Crawford R. Thoburn's choral compositions, arrangements, and editions have been published. Choirs across the U.S. and throughout the world sing his music, with performances noted in Nova Scotia, British Columbia, England, Germany, Austria, France, South Africa, Singapore, India, and Taiwan. Professional, church, and college groups record his works, which have been broadcast on National Public Radio and Public Radio International. At Wells College in Aurora NY, Crawford R. Thoburn is Professor of Music and Director of Choral Activities. His student choral groups have won international awards in juried competition, performed by invitation at ACDA conventions and MENC meetings, toured in the U.S. and Europe, performed with many other college groups, and sung with professional orchestras. He has conducted numerous inter-collegiate choral collaborations, and enjoys a national reputation for expertise in women's choral literature and performance. Professor Thoburn has a B.A. from Allegheny College, where he studied theory, arranging, and conducting with Morten J. Luvaas. In 1999, the Allegheny Alumni Association selected him to receive its prestigious Gold Citation, ""in recognition and appreciation of the honor reflected upon the college by virtue of his professional achievements."" At Boston University, Professor Thoburn received a M.M. and worked as an assistant to his instructor in voice and conducting, Allen C. Lannom. He later studied choral and orchestral conducting with Otto-Werner Mueller, Margaret Hillis, and Robert Shaw. While on a year-long sabbatical leave, he was a member of and soloist with the St. Martin Singers of London, England, under the direction of W. D. Kennedy-Bell. Crawford served on the first National Committee on Editorial Standards of the American Choral Directors Association. His scholarly articles have appeared in the American Choral Review, Wells College Express and the Choral Journal, where he headed the Choral Review Department for five years. At Wells, Professor Thoburn chaired the Music Department, the Division of the Arts, the Centennial Committee, the New Arts Facilities Committee, the Summer College Program, and the Faculty Advisory Committee, and he was named the first Campbell Professor of the Arts. Off campus, Crawford has served many years as a choral director for Methodist, Lutheran, Presbyterian, and Episcopalian congregations. He is profiled in the 59th edition of the original Marquis biographical directory Who's Who In America. 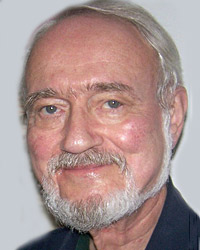