Z. Randall Stroope is one of the most active choral conductors and composers working today, with recent conducting engagements at the American School in Singapore, Canterbury Cathedral (England), Salzburger Dom (Austria), Kennedy Center for the Performing Arts (Washington, D.C.), Vancouver Symphony (British Columbia), and three performances at the Vatican. He also is Artistic Director for summer international choral festivals in Berlin, Germany and Rome, Italy. Stroope has toured 15 countries with ensembles under his direction, including China and South Africa. In the United States, Dr. Stroope has conducted 35 all-state choirs (Kentucky, New Hampshire and Delaware in 2011), and does many clinics each year for professional choirs, universities, and state music organizations across the country. At Oklahoma State University, Dr. Stroope is the Director of Choral and Vocal Studies where he conducts the Concert Chorale and Chamber Choir, oversees recruitment activities, and coordinates the undergraduate and graduate conducting program. Prior to teaching at OSU, Dr. Stroope was the Director of Choral Studies at Rowan University in Glassboro, New Jersey. Dr. Stroope has 95 published works. His compositions sell over 200,000 copies a year, and are performed regularly by esteemed ensembles throughout the world, including professional ensembles in the United States, France, Holland, Hong Kong, Spain, Japan, Australia, the Czech Republic, and Canada. Dr. Stroope has personally conducted/recorded 13 professional compact discs, and recordings of his music are heard frequently on radio and television broadcasts, including National Public Radio. Born in Albuquerque, New Mexico, Stroope completed his masters in voice performance at the University of Colorado (Boulder), and a doctorate in conducting at Arizona State University. He also did post graduate individual conducting study with Margaret Hillis, Chorus Master of the Chicago Symphony. As a recipient of the Australian-American Fulbright, he has also done work in Western Australia. Dr. Stroope and his wife, Cheryl - a middle school choral music teacher in Stillwater - enjoy travel and time with their Sheltie. 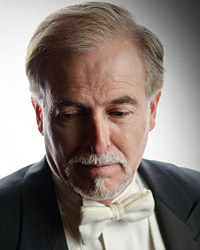