Paul Creston (1906-1985), born Joseph Guttoveggio, was one of the most widely performed 20th century American composers. His compositions were performed by many of the world’s most distinguished orchestras and conductors, including Toscanini, Ormandy and Stowkoski. His parents, recent immigrants from Sicily, encouraged his musical talents as much as their limited resources allowed. Creston had formal lessons in the piano and organ, but was entirely self-taught in composition. During his long career, he wrote over 150 compositions including six symphonies, concerti for various instruments, choral music, music for concert bands, television scores and ballet music. His works are characterized by their intricate rhythms(often influenced by dance), melodic richness and a flexible approach to tonality. They are much loved by performers and audiences since they manage to combine musical traditions of the past in a more modern idiom. Creston was also a fine pianist and organist, and often conducted his own compositions. He was the recipient of numerous awards during his lifetime, including: the Music Circle Critics Award, the American Academy of Arts and Letters Award, and two Guggenheim Fellowships. Some of his most popular pieces are published by Shawnee Press including: Sonata for Saxophone and Piano, Op. 19 and Night in Mexico. 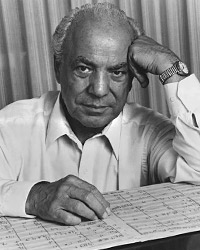