Dr. Larry Nickel, an Associate Composer of the Canadian Music Centre, is a busy choral clinician and sings bass in the Vancouver Chamber Choir. In 2003 Larry took a leave from 25 years of teaching music and drama to complete a Doctorate in Composition. His thesis, Requiem for Peace, is an extensive work for chorus and symphony orchestra in twelve languages. It received a second performance at the Orpheum in 2009 with the VSO and the Vancouver Bach Choir. Larry is co-founder and composer-in-residence for the West Coast Mennonite Chamber Choir, which has recorded over 120 of Larry's compositions on thirteen CDs. Larry’s music is published by Cypress, Shawnee Press, Morton Music, Classica, Pavane, Canadian International, G. Schirmer and Oxford University Press, and is presented widely with recent performances in Toronto, Kiev, Tokyo, Melbourne, Cape Town, and Taipei. 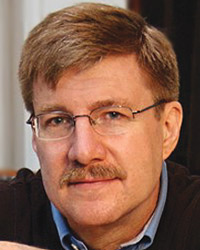