Paul Leddington Wright was organ scholar at St. Catharine's College, Cambridge where he studied with Peter Le Huray, David Willcocks and Alan Ridout. On leaving Cambridge, he freelanced for four years working mainly in the professional theatre as a musical director. In 1982 he was appointed musical director for the Methodist Association of Youth Clubs, during which time he consolidated the work of the MAYC Singers and Orchestra, which he founded in the 70's. In 1984 he was appointed Organist and Director of Music at Coventry Cathedral, a position he held until 1995. During this period, he recorded and broadcasted frequently with the Cathedral Choir, and toured all over the world, including five trips to the US, Jamaica, and a trip to Italy, where the choir sang for the Pope. He directed the music for many important occasions at the Cathedral, including the Queen's visit to Coventry for the distribution of the Royal Maundy in 1995. Since 1984, he has been conductor of the Cathedral's choral society, the Saint Michael's Singers, with whom he has made over 20 recordings. Many of those recordings have been for the Kingsway Hymnmakers Series. A new series of the choir's recordings has been released in the USA under the Cathedral Classics - Coventry Music label. He has conducted a vast repertoire of choral literature with choirs and orchestras both in the UK and abroad. In 1995, he became parttime at Coventry in order to make space for an increasing work schedule at the BBC. He is the principal conductor for the weekly BBC TV program, Songs of Praise, and since 1986 has conducted over 150 programs all over the world. He is also a prolific arranger for the series. Major programs he has conducted have come from cathedrals, concert halls, and four programs from the Royal Albert Hall, London. In 2000, he conducted 65,000 people at the Cardiff Millennium Stadium. He is also involved with BBC Radio and conducts frequently for the Radio 4 Daily Service and also the Radio 4 Sunday Morning Worship. He also records for Radio 2's Sunday Half-Hour. Since 1991 he has been Artistic Director of the annual International Church Music Festival, which has alternated between Coventry Cathedral, Chester Cathedral and Bern, Switzerland. He was guest conductor for Belmont University's 2007 Christmas at Belmont which was recorded in Nashville's Schermerhorn Symphony Centre, and broadcast nationwide on PBS Christmas 2007 and 2008. His choral music includes many commissions from churches in the UK and USA. 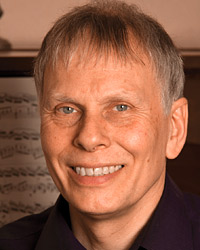