As one of the arrangers for the "Al-American" Marching Band at Purdue University, his marching/pep band arrangements have been performed before national audiences, at Purdue athletic events, and at a Bands of America Marching (BOA) Finals Exhibition Performance by the Purdue AAMB Trombone Section.

Cox is in demand as a festival adjudicator, clinician, and conductor. He has adjudicated concerts, marching, and solo and ensemble festivals for the Indiana State School Music Association (ISSMA) and has served as a consultatn and clinician in numerous Indiana schools and for music programs including the Metropolitan Nashville, Chicago, Mobile, and Atlanta Public School systems. Cox has conducted a number of groups, including the Kokomo Park Band, the Lafayette Symphony's Youth Orchestra and the Purdue University Wind Ensemble, and guest conducted the Purdue Philharmonic Orchestra on their 2011 Eastern European Tour. He has guest conducted the middle Tennessee State University and Auburn University Honor Bands, the Indiana Bandmasters Association Regional and District Honor Bands, the Northern Illinois University Wind Ensemble, and University of South Alabama Symphonic Band and Wind Ensemble. 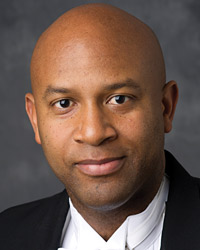