Ryan O'Connell is in demand as a composer, arranger, orchestrator, music director, and conductor. His music has been heard worldwide in a variety of venues: in film, on stage, and in the concert hall. He is perhaps most widely known for his popular choral arrangements for Shawnee Press and Alfred.

After graduating from the prestigious Scoring for Motion Pictures and Television program at the University of Southern California, Ryan has begun to make his mark writing music for media, with his music featured in prominent works such as "Dragons: Riders of Berk" (Cartoon Network). He has also orchestrated and conducted scores for TV and film, such as "Nightline" (NBC), “Wild Things” (NRDC Films), and “Browsers” (Amazon).

In the world of musical theatre, Ryan is actively working as an orchestrator and music director, having been involved in over 50 stage productions. Most recently he was the lead orchestrator and music director for the Seattle premiere of “Ernest Shackleton Loves Me” at Seattle Repertory Theatre. Additionally, he recently orchestrated Marshall Pailet’s newest show, Loch Ness. He has also written two musicals of his own, and continues to develop ideas and music for the stage. Ryan currently lives in Los Angeles. 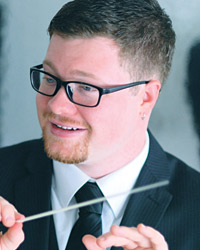