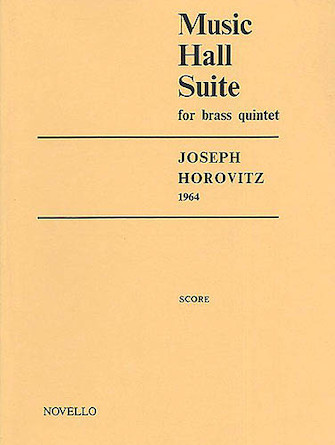 This work was composed in 1964 at the request of the well known American tuba player Roger Bobo. It was soon taken into the repertoire of the Philip Jones Brass Ensemble, who gave the first BBC broadcast. The first recording was on Pye records, by the Hallé Brass Ensemble. Since then it has become a regular repertoire piece and recorded as well as broadcast all over the world. The Suite consists of five movements, all illustrating aspects of the Burlesque Theatre, Music Hall, circus and cabaret, so popular at the end of the 19th century and into the 20th. The titles of the short movements are: Soubrette Song, Trick Cyclists, Adagio Team, Soft Shoe Shuffle and Les Girls.

The five orchestral brass instruments (two trumpets, horn, trombone and tuba) are exploited in a chamber music manner, but the cumulative effect has a theatrical quality in keeping with the title.

Due to high demand, Music Hall Suite for Brass Quintet is on back order