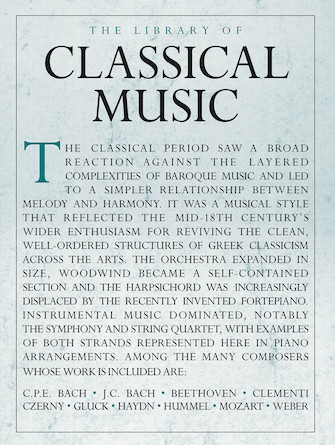 The Classical period saw a broad reaction against the layered complexities of Baroque music and led to a simpler relationship between melody and harmony. It was a musical style that reflected the mid-18th century's wider enthusiasm for reviving the clean, well-ordered structures of Greek classicism across the arts. The orchestra expanded in size, woodwind became a self-contained section and the harpsichord was increasingly displaced by the recently invented fortepiano. Instrumental music dominated, notably symphony and string quartet, with examples of both strands represented here in 70 piano arrangements. Among the many composers whose work is included are C.P.E. Bach, J.C. Bach, Beethoven, Clementi, Czerny, Gluck, Haydn, Hummel, Mozart and Weber.

100 of the Most Beautiful Piano Solos Ever Piano Solo Songbook

The Library of Sonatas and Sonatinas Music Sales America

The Joy of Schubert, Schumann and Mendelssohn Yorktown

The Library of Classical Music has been added to your cart

The Joy of Schubert, Schumann and Mendelssohn Yorktown Add to Cart