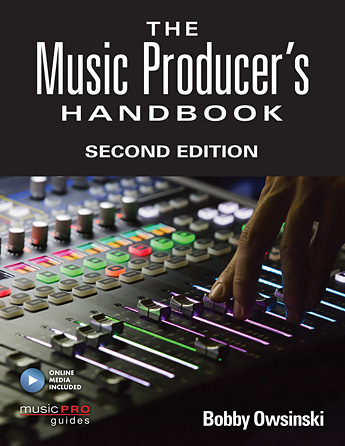 The Music Producer's Handbook, Second Edition reveals the secrets to becoming a music producer and producing just about any kind of project in any genre of music. Among the topics covered are the producer's multiple responsibilities and all the elements involved in a typical production, including budgeting, contracts, selecting the studio and engineer, hiring session musicians, and even getting paid. Unlike other books on production, The Music Producer's Handbook also covers the true mechanics of production, from analyzing, troubleshooting, and fixing a song that isn't working to getting the best performance and sound out of a band or vocalist. In addition, Bobby Owsinski tackles what may be the toughest part of being a producer – being a diplomat, a confidant, and an amateur psychologist all at once.

This edition also includes new chapters on self-production, small studio production, and how the new songwriter-producer and engineer-producer hybrids make money in our new digital music world. It also features several new interviews with some of the best-selling producers from different musical genres, who offer advice on getting started, getting paid, and making hits.

Packed with inside information and including exclusive online media, The Music Producer's Handbook, Second Edition provides invaluable tools and advice that will help beginners and seasoned professionals alike. The video content is accessed online for download or streaming by using the unique code that comes with each purchase.

The Music Producer's Handbook has been added to your cart

Due to high demand, The Music Producer's Handbook is on back order