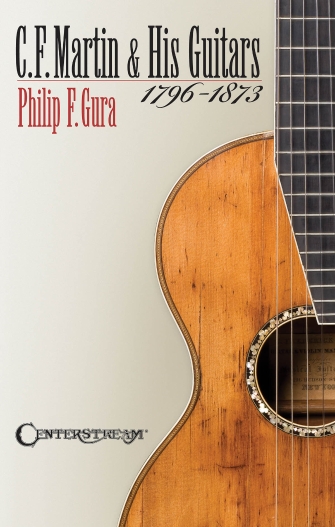 The Martin is considered the finest acoustic guitar in the world, a distinction it has held for more that 160 years. Martin guitars have been played by performers Eric Clapton, Stephen Stills, Judy Collins, and Johnny Cash, as well as hundreds of thousands of other professional and amateur musicians. In C.F. Martin and His Guitars, 1796-1873, Philip Gura chronicles the career of Christian Frederick Martin from his humble start as an importer and repairman of musical instruments in New York City in the 1830s through his move to Nazareth, Pennsylvania, and the founding of C.F. Martin & Company. Gura is the first historian to thoroughly study the Martin company records dating back to the 1830s: Letters, account books, inventories, and other documents. Using this rich archive, Gura establishes how a German immigrant from Saxony's guild tradition became the finest American guitar maker of his time and created a uniquely American business that successfully eclipsed its competition.

As Gura shows, Martin's success was based on his successful navigation of the rapid economic expansion and industrialization of his time. The many sketches and hundreds of photographs illustrate how Martin adapted his artisanal craft to modern industrial methods, maintaining quality while meeting increased demand for instruments. Gura traces the network of suppliers who provided Martin with his raw materials and explores the advertising and other methods Martin employed to build a market for his goods. After Martin's death in 1873, the company continued to grow. It thrives today under the leadership of a sixth-generation Martin, producing instruments that are still the most sought after and collectable in the world. Includes an 80-page color section!