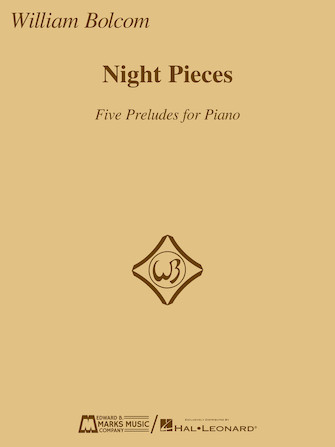 I had an overwhelming experience at Pierre Boulez's Domaine Musical concerts, as well as those of the French Radio (ORTF) that also specialized in the very newest music (a year-old piece was already passé). Although there seemed little interest in the Boulez-Stockhausen-Berio musical world in the U.S. when I returned in 1961, I would as pianist set out to rectify this omission, then only successfully on the West Coast. Night Pieces was written in Paris, shortly after I began my acquaintance with the current European international style, and premiered there. I never, however, wanted to eschew any musical reference from the past, including tonality as so many composers did then-and the first sound in the pieces is a C-major triad, in 1960 a shocking chord. What I did absorb from the prevailing style was its liberation from regular meter, and the gestural language is largely derived from Boulez andrelated piano music. (The reference to Schoenberg in the last prelude is an hommage.) David Chaitkin, the dedicatee, also lived at the Cité Universitaire when I was there. A fine composer, not well known enough; he passed away in 2011. ---William Bolcom

Monsterpieces and Others Piano Publications

Variations on a Theme by George Rochberg E.B. Marks

Primer and Other Duets for One Piano/Four Hands E.B. Marks

Night Pieces: Five Preludes for Piano has been added to your cart

Variations on a Theme by George Rochberg E.B. Marks Add to Cart

Primer and Other Duets for One Piano/Four Hands E.B. Marks Add to Cart

Due to high demand, Night Pieces: Five Preludes for Piano is on back order