for Viola and Piano 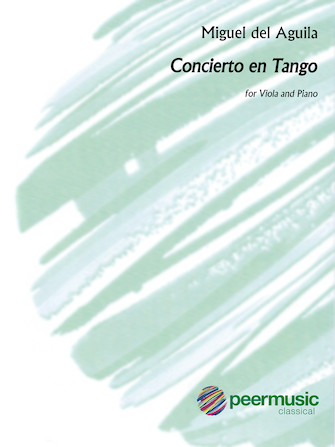 for Viola and Piano

Program Notes: While most people associate Tango with the 1920's Valentino films or the Tango Nuevo of Piazzola, to many of us who grew up in Montevideo or Buenos Aires in the 50's and 60's, Tango has a very different connotation. It is associated with childhood memories of happy and prosperous times and with happy family gatherings where we as children often just enjoyed watching everyone dance. In that context, Tango carries a special nostalgia from that time and place in a society that no longer exists. Those were the times before the economic collapse of the 70's and the horrors of the 'Guerra Sucia' of the military dictatorships that followed. The imagery of these events is portrayed within the music of Concierto en Tango.

Rather than limiting myself to this style, I also included idioms from earlier Tango styles, including the 19th century Spanish Tango-Habanera, the Brazilian Tango/Maxixe, and the early Milongas of the late 19th and early 20th centuries, in which the African influence was still evident in its syncopations and fast beat. However, Concierto en Tango has a rhythmic complexity beyond any of these dances, and it represents my abstraction of those rhythms as they fuse with my own personal style.

The harmonic language is conservative. It relies mainly on major/minor modes and 7th or 9th chordal harmonies, as they are used in Tango. I deliberately tried to avoid a 'classical' sound and especially the overly intense romantic style of many cello concertos, which combined with the melodrama of tango would have resulted in a very dark work. Several humorous and light hearted passages add a joyful side to the tango genre which is traditionally deprived of such positive emotions.

The overall form is ABA - fast-slow-fast. The middle, slow section features the traditional cantabile and expressive qualities of the cello while the outer fast sections require an outmost rhythmic precision, bow control and accuracy of intonation in the highest registers of the instrument. Some of these fast sections challenge the performers with constant time signature shifts. (At times we can find almost one hundred consecutive bars where each one has a different and irregular time signature). The most used meters are 7/16 + 9/16 + 11/16 + 5/16. Some of these passages are played by a quintet of soloists comprising the cello, violin, double bass, piano and conga drums.

Litany for Viola and Piano