Stories from the Cutting Edge of Recording Music 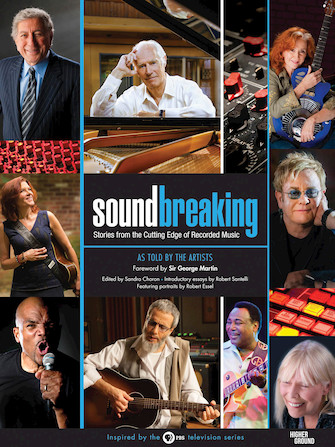 Stories from the Cutting Edge of Recording Music

This book was inspired by the eight-part Grammy® nominated film series titled, Soundbreaking: Stories from the Cutting Edge of Recorded Music. As Executive Producer, Sir George Martin, was the inspiration and intellectual force behind the series, which explores a century's worth of innovation and experimentation in the creation of music to present a behind-the-scenes look at the birth of new sounds. From the Beatles' groundbreaking use of multitrack technology to the synthesized stylings of Stevie Wonder, from disco-era drum machines to the modern art of sampling, Soundbreaking tells the stories behind the sounds and reveals how innovation redefined not only what we listen to and how we listen to it, but our very sense of what music is and can be.

Soundbreaking features original interviews with more than 150 of the most celebrated artists, producers, and music industry pioneers of our time. This volume presents a curated selection of those interviews from across eras and genres. The twenty-one artists featured here share their personal insights, which point to themes that emerge and echo throughout: the importance of varied cultural influences on music careers; the role of technology innovation in the creative process; and most commonly, the human connection to music.

Through their lens we discover fascinating new insights into music and especially into the relationship between artist and genres, an area that has been rarely studied. For some readers, this book will evoke many of the sounds and textures of days gone by. For others, it will serve to open doors to further enjoyment and that those readers will pursue artists and others whose names may not be familiar.

Robert Santelli's introductions to each of the profiles puts each artist in context. They have all made valuable contributions to what has often been referred to as the soundtrack of our lives. Their music is as relevant today as when we first heard it. Recorded music has crossed the lines that separate cultures, ideas, and generations. In exploring the story of their own music, the voices in this book provide thoughtful insight to the extraordinary influences of recorded music on the modern world.