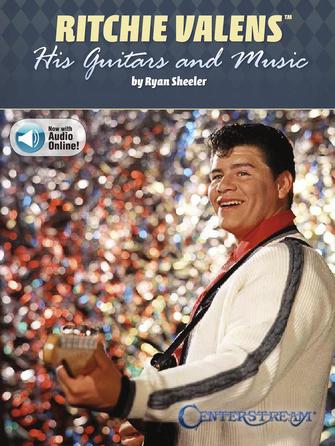 Ritchie Valens was the first nationally recognized Latino rock 'n' roll star. He had a meteoric rise to fame in a career that lasted barely eight months, before his tragic death along with Buddy Holly, The Big Bopper and pilot Roger Peterson, in a plane crash north of Clear Lake, Iowa. Ritchie's unique guitar style and high-energy performances made him a well-known figure in the “Golden Age of Rock 'n' Roll.”

In Ritchie Valens: His Guitars and Music, guitarist and author Ryan Sheeler takes an in-depth look at Ritchie's music in a different light than other accounts. Included in the book are photos and information on his famous guitars, as well as an observation into how he might have approached his playing. This book also presents a brand-new transcription of “La Bamba” with accompanying guitar tablature of the famous intro riff and Ritchie's celebrated guitar solo.

Join Ryan for a look back at one of the pioneer guitarists of early rock 'n' roll in Ritchie Valens: His Guitars and Music.

Ritchie Valens has been added to your cart

The Gibson 335 Guitar Add to Cart

Due to high demand, Ritchie Valens is on back order