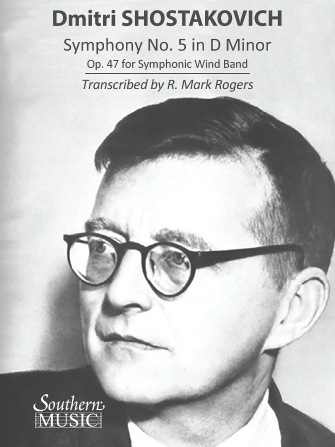 Mark Rogers began his band transcription of the Shostakovich Fifth Symphony at the request of the U.S. Army Field Band and Conductor Finley Hamilton, arranging the work's Finale for the ensemble, which it subsequently performed and recorded. Movements 2 and 3 would follow later, performed by the Lone Star Wind Orchestra. This arrangement of one of the 20th Century's greatest symphonies was completed at last in 2018 with the addition of the opening movement. This Southern Music publication represents the first complete band transcription of Shostakovich's monumental work, welcoming his orchestral masterpiece into the serious repertoire for symphonic wind band. Shostakovich's Fifth Symphony was composed in 1937 in response to a savage attack on his music that was directed from the topmost levels of the Soviet government. We now know this period in Russian history as the Great Terror, during which time dissidents were routinely abducted from the streets, then either summarily executed or forced to endure show trials of monstrous cruelty. Shostakovich had every reason to fear for his life, but he nevertheless composed a work that seemed from the surface to represent a return to the conservative traditions of the past (with many similarities to the symphonies of Beethoven, in particular Beethoven's 9th, also in D minor). Under the surface, Shostakovich composed a work that teems with defiance and hidden meanings that are only narrowly understood today. All in all, this symphony represents his supreme achievement and is regarded as his greatest masterpiece.

Spanish Dance (from “The Gadfly”)

March from Suite for Variety Orchestra, No. 1