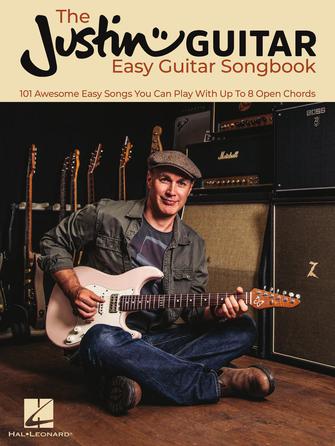 Justin Sandercoe, better known as simply JustinGuitar, is one of the most trusted and successful online guitar instructors in the history of the internet. After starting as an instructor at the Guitar Institute in London, he quickly realized the potential of online video lessons and began posting video lessons in 2001. His video lessons have clocked up over 400 million views and his YouTube channel has nearly a million subscribers. He's been called “one of the most influential guitar teachers in history” and guitar legends such as Brian May and Steve Vai sing his praises.

Hal Leonard has been working with Justin to publish print versions of his instructional methods and now has released the JustinGuitar Easy Guitar Songbook, featuring 101 popular songs that can be played with up to eight open chords. Songs are presented in sequential difficulty order in chord/lyric format with lesson tips, chord diagrams, and more. The collection includes top hits, including: Ain't No Sunshine • Bad Moon Rising • Brown Eyed Girl • Cecilia • Eleanor Rigby • Every Rose Has Its Thorn • Fever • Folsom Prison Blues • Free Fallin' • Good Riddance (Time of Your Life) • Jolene • La Bamba • Lay down Sally • Louie, Louie • Moves like Jagger • Mustang Sally • Perfect • Radioactive • Ring of Fire • Royals • Shake It Off • Shape of You • Stand by Me • Wild Thing • Yellow Submarine • Zombie • and more.