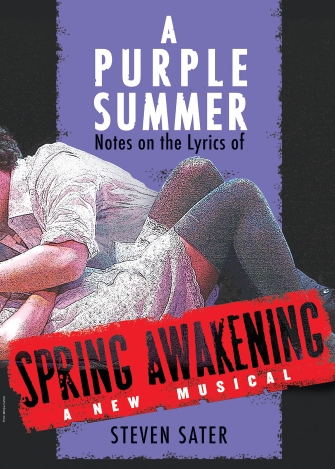 In February 1999, Steven Sater conceived the radical notion of creating a rock musical from Frank Wedekind's notorious Symbolist drama, Frühlings Erwachen, and he enlisted his friend and writing partner Duncan Sheik in the enterprise. That night, Sater came home and began writing the first lyric of Spring Awakening: “Mama Who Bore Me” – a lyric which still stands, verbatim, just as he first wrote it.

In rich detail, Sater's notes address the literary sources and allusions of each lyric. He also writes feelingly of what prompted the songs over the course of the show's eight years of development. In so doing, Sater expands on his partnership with Sheik and his experiences with original cast members, Lea Michele and Jonathan Groff, now also known from Glee.

These notes will prove invaluable for fans of the show, for all those interested in theater, and most especially for all the young performers who will play the roles and sing these songs.

Oli Herbert from All That Remains – Metal Guitar Rock House

All You Need to Know About Two Handed Tapping Lick Library

A Purple Summer has been added to your cart