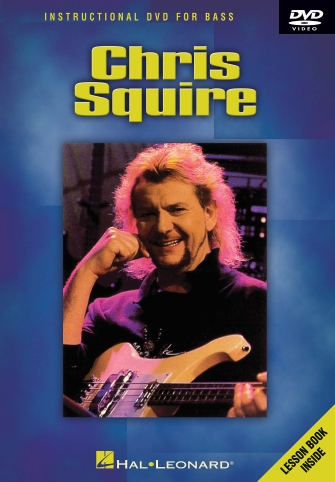 Founding member and innovative bass player with the classic rock group Yes, Chris Squire is a major force in the band's revolutionary sound. His unique approach to the bass in an integral part of the recognition that Yes receives as one of the most influential groups on rock music history. The band Yes was formed in the late 1960s, and Chris is the only original band member that still performs with the band today. In this in-depth interview with Chris Squire, taped in 1990, Chris reveals some of his earliest aspirations in music to his prolific contributions as the bass player with Yes. Chris demonstrates his unique style in songs performed on the 90125 World Tour, after the release of Yes' double-platinum album “Owner of a Lonely Heart.” Live performances include “Changes,” where he plays a potent 8-string bass; plus “I've Seen All Good People,” “'Round About,” “I'm Running,” and “Cinema.” Chris gives us a close look at the styles and technique he uses with a unique collection of basses. With a rebellious and visionary style, Chris says, “It's down to must attacking things, really.” So step into the world of Chris Squire, with fascinating musical history, bass riffs, and riveting live concert footage.

Scales & Modes At a Glance

Chris Squire has been added to your cart

Scales & Modes At a Glance Add to Cart

Due to high demand, Chris Squire is on back order