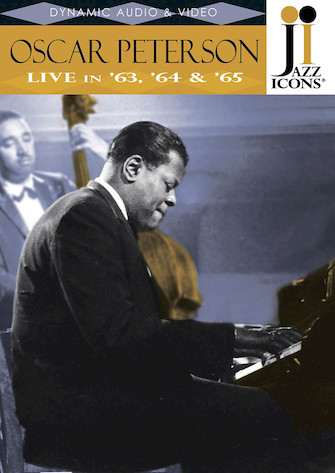 The incredible Oscar Peterson Trio is filmed through three years in three countries on this DVD, delighting audiences with their classic repertoire and their unparalleled musicianship. This legendary '60s trio of Peterson, bassist Ray Brown and drummer Ed Thigpen are still considered one of the most formidable jazz combos ever. A very early performance of Peterson's signature tune “Hymn to Freedom” is included, as well as a special guest segment showcasing the amazing Clark Terry on trumpet and cornet. 84 minutes.

Songs performed from the 1963 Sweden concert include: Reunion Blues • Satin Doll • But Not for Me • It Ain't Necessarily So • Chicago (That Toddlin' Town).

Songs performed from the 1965 Finland concert include: Yours Is My Heart Alone • Mack the Knife • Bluesfor Smedley • Misty • Mumbles.

The Very Best of Oscar Peterson

Oscar Peterson – Music in the Key of Oscar