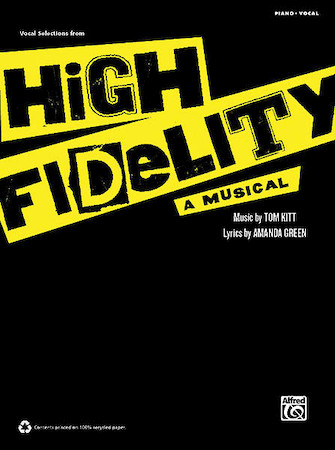 Based on the Nick Hornby novel of the same name, the 2006 Broadway musical High Fidelity features a pop/rock-driven score by Tom Kitt (Next to Normal) with lyrics by Amanda Green. Despite the production's short life on Broadway, songs from the show have become favorites among the musical theatre community for auditions and performances. Titles: The Last Real Record Store on Earth • Desert Island Top 5 Break-Ups • It's No Problem • She Goes • Number 5 with a Bullet • Ready to Settle • Nine Percent Chance • I Slept with Someone (Who Slept with Lyle Lovett) • I Slept with Someone (Who Handled Kurt Cobain's Intervention) • Goodbye and Good Luck • Laura, Laura • Turn the World Off (and Turn You On) • Too Tired.

Women on the Verge of a Nervous Breakdown

The King and I – Revised Edition

Catch Me If You Can

The People in the Picture

Priscilla, Queen of the Desert – The Musical

Spider-Man: Turn Off the Dark