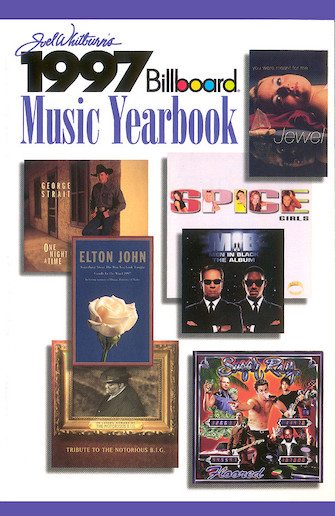 The 1997 Music Yearbook is the ultimate recap of the year's hits and happenings in the world of music. Everything that made Billboard's singles and albums charts in Pop, Country and R&B music, as well as the Rock Tracks, Bubbling Under and Adult Contemporary singles charts, is exhaustively covered. Get the complete stats (chart debut date, peak position, total weeks charted, and more) on Elton John's “Candle in the Wind '97”; Puff Daddy's chart-topping reign as writer/producer/ rapper; the Spice Girls and Hanson phenomenons; Leann Rimes' giant crossover success; the return of Fleetwood Mac, The Rolling Stones and Hall & Oates; the hit debuts of OMC, Lee Ann Womack, Smash Mouth, Michael Peterson and Sugar Ray. Also features a Time Capsule of the year's events, entertainment obits, the #1 hits of nearly 20 charts, and many special sections.