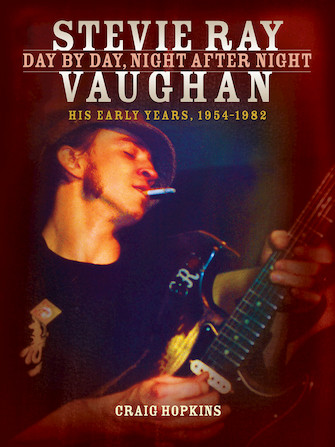 It is no easy feat to capture the enormous spirit of Stevie Ray Vaughan, a man whose presence in the world was like an untamable fire, shooting flames of raw talent, passion, and innovation. That bright light wrestled with a dark side, an addiction and sadness that threatened to put out the fire forever. His unmatched guitar playing, buttery vocals, and unforgettable songs made him a triple threat. Vaughan is arguably the greatest guitar god who has ever lived – a re-inventor of guitar and the blues. Twenty years after his death, he lives on in the hearts of millions of people around the world.

In a day-by-day format, Craig Hopkins presents an unprecedented celebration of this wonderful artist. This book is the first installment of a two-volume account of Vaughan's life. With this work, Hopkins delivers one of the most detailed biographies of any musician. This edition covers the complete history of Vaughan's roots, from his childhood to just before his first major release. Filled with testimonials from those who knew him best and from fans everywhere, along with facts about tour dates and recordings, stories about his bands and life on the road, rare artistic and historic photographs, and more, this lavishly illustrated book is the ultimate collector's item for any Stevie Ray Vaughan fan.