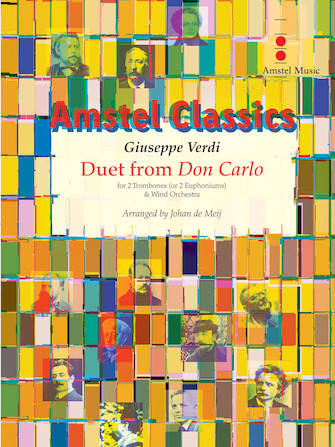 Don Carlo was originally written (title Don Carlos) as a French five-actor for the 1867 world exhibition in Paris. Later, Verdi transformed this improant grand opera into a four-acter in Italian. With its many leitmotifs, Don Carlo was 'too Wagnerian' according to French critics – although Verdi hardly knew the music by his German colleage. For the record, the composer was not happy either with the 'lifeless and cold' performance in Paris, and the drama – concerning Charles V, Philip II and crown price Don Carlo – found its way to La Scala only twenty years later. This duet, arranged by Johan de Meij, originates from the second act. While monks pray for the soul of Emperor Charles V, his grandson Don Carlo takes the stage, tormented by the fact that the woman he loves is now married to his father. Carlo's friend Rodrigo, the Margquis of Posa, has just returned from Flanders. He asks crown prince Carlo to help him ease the oppression and suffering of the Flemish people. Carlo reveals his secret: he is in love with his stepmother. Rodrigo advises him to leave Spain and to go to Flanders. The two men vow to be friends forever in the duet Dio, che nell' alma infondere ('God, who wishes to instil love and hope in our souls').

Hobbits Dance and Hymn (from The Lord of the Rings)

Dance of the Amazon

The Mask of Zorro