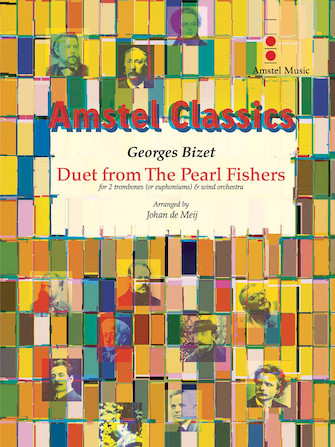 Les pêcheurs de perles (The Pearl Fishers) is an opera in three acts by French composer Georges Bizet, who particularly made his fame with his opera Carmen.

The opera was first performed on 30 September 1863 at the Théâtre Lyrique in Paris, and was given 18 performances in its initial run. Set in ancient times on the island of Ceylon (Sri Lanka), the opera tells the story of how two men's vow of eternal friendship is threatened by their love for the same woman, whose own dilemma is the conflict between secular love and her sacred oath as a priestess. The friendship duet Au fond du temple saint, generally known as The Pearl Fishers Duet, is one of the best known in the opera literature.

This arrangement for two trombones was written for and dedicated to trombone legends Joseph Alessi and Jörgen van Rijen. It serves as a possible encore piece in combination with Two-Bone Concerto, which was also written for them. The duet can also be performed by two euphoniums, or as the original vocal duet for tenor and baritone voice.

Henry V – Suite from the Movie