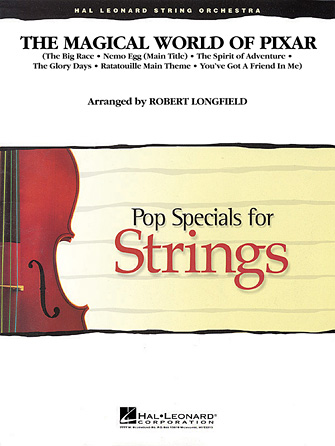 The unmatched creativity of Pixar Studios continues with blockbuster films that have become entertainment icons of our time. Each has a memorable musical score, several of which are combined into this terrific showcase for string orchestra.

Includes: The Big Race (Cars), Nemo Egg (Finding Nemo), The Spirit of Adventure (Up), The Glory Days (The Incredibiles), Ratatouille (Main Theme), and You've Got a Friend in Me (Toy Story).

The Best of ABBA

The Chronicles of Narnia – The Lion, the Witch and the Wardrobe

Moon River (from Breakfast at Tiffany's)

When She Loved Me

Pirates of the Caribbean: On Stranger Tides