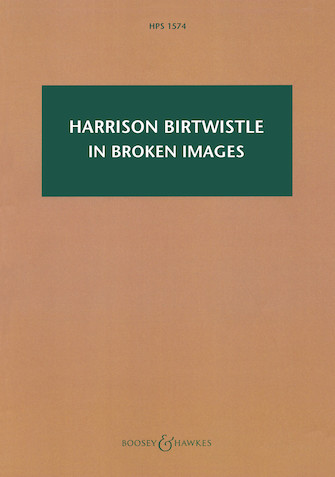 Harrison Birtwistle's In Broken Images took as its starting point the music of Giovanni Gabrieli with its interplay between groups of instruments, but rather than emulating the Venetian composer's use of echo effects and ritornelli, Birtwistle's work tracks an independent path in which the music is in a permanent state of exposition. The wind, brass and strings are fiercely independent demonstrating distinct identities, while the percussion underpins each musical family providing the continuum. The fragmented multiplicity of events in Birtwistle's work is only fully clarified for a single bar, near the end, when the groups play the same music. Otherwise there is a calculated non-synchronisation of the blocks of material using a hocket technique. After completing the score the composer recognised that the moment of unity offered an analogy to the Risorgimento: “It wasn't a conscious thing when I was composing to mirror the political situation but there is a similar moment of coming together. Just as in Italy, though, the different identities continue with each retaining its own distinct 'cuisine'.” Full orchestra materials available on hire. Suitable for advanced standard performers.

“The work's four instrumental groups – woodwind, brass, strings and percussion – echo and react to each other as though in a latter-day Gabrieli canzona ... the way in which his blocks of musical material move in and out of focus, become submerged and resurface again in different forms, or just occasionally combine into gestures of seismic intensity, still seems the product of a mysterious ritual of which the audience only experiences one element.” –The Guardian

The Woman and the Hare Boosey & Hawkes Scores/Books

In Broken Images: After the Antiphonal Music of Gabrieli has been added to your cart

Due to high demand, In Broken Images: After the Antiphonal Music of Gabrieli is on back order