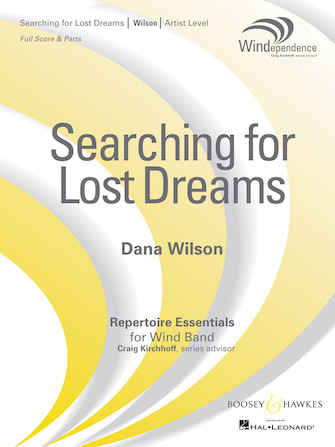 “As I began this piece, it was as though I were entering a dream. The music was atmospheric, undefined, and somewhat disorienting. Gradually the material became more focused, but just in time to switch to a very different--though related--sound world, which became the second movement. The overall poignancy, varied sound worlds and dramatic shape of the music suggested the title.” ~Dana Wilson Dur: 8:00 (Recorded by the North Texas Wind Symphony, Jacqueline Townsend, conductor)

Odysseus and the Sirens BandQuest

Odysseus and the Sirens (Score Only) BandQuest

Speak to Me Windependence Master Level

Speak to Me Windependence Master Level

Searching for Lost Dreams has been added to your cart

Odysseus and the Sirens BandQuest Add to Cart

Odysseus and the Sirens (Score Only) BandQuest Add to Cart

Speak to Me Windependence Master Level Add to Cart

Speak to Me Windependence Master Level Add to Cart

Due to high demand, Searching for Lost Dreams is on back order