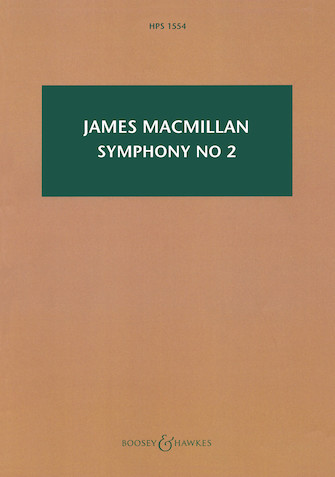 Scored for chamber orchestra and dating from 1999, this work is built on MacMillan's shorter Piano Sonata of 1985. That work was composed during a bitter Ayrshire winter: the composer recalls the barren trees and hard frozen ground of a landscape that was empty and silent but for the harsh, hollow cry from the rookeries. Throughout the three movements the music conveys a mood of elegy, despair and desolation. In Symphony no 2 the original has been 'opened up' to new forms of expansion, sometimes according to colouristic potential, at other times to dramatic or even originally unseen potential. The first movement is short and preparatory to the more extended second movement. The third movement is a brief postlude, almost an afterthought to what has been heard, during which some of the principal memories of the earlier movements are stated over some quotations from Wagner's Tristan und Isolde.

Lux Aeterna from The Strathclyde Motets

The Lamb Has Come for Us (from The House of David)

The Strathclyde Motets I

Concerto for Piano and Orchestra

St Luke Passion: The Passion of Our Lord Jesus Christ According to Luke