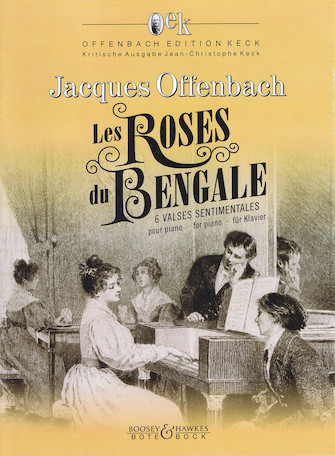 Les Roses du Bengale are part of a whole series of dances for piano from the quill of the young Jacques Offenbach (1819-1880). Unfortunately, little is known about their genesis. It is quite likely that these six lyrical waltzes were composed at different points of time, and their creation occasioned by various events, before being joined together into a collection for publication. Each piece is dedicated to a particular dedicatee (a rose) who stems from the Parisian nobility: Clémence de Reiset, Herminie de Alcain (the future Madame Offenbach), Virginie de Bletterie, Emilie de Giresse, Léonie de Vernon, and Ursule de Beaumont. A pretty bouquet to which the only twenty-year-old composer was certainly not indifferent. For him, it was surely also a means of attaining a special place in the fashionable salons into which he had been introduced by his friend Friedrich von Flotow. The cycle was published by Editions Henri Lemoine. We do not know the exact year of publication, which however certainty was in the early 1840s. In their delicacy, their inventiveness, and richness of contrast, these waltzes were surely intended for an intimate soiree, and not for a ball like numerous other of Offenbach's waltzes that were composed for the Jardin Turc, the Concerts Musard, or the Concerts Jullien. For that matter, orchestral versions are not known for any of the six waltzes of this collection. Only of the first waltz did Offenbach make a version for small ensemble, presumably for performance in a Parisian salon, for two violins, violoncello, and piano. The untitled manuscript is still found today in the archive of the Offenbach family, as is also the autograph of the Valse tyrolienne no. 2, composed on 11 July 1842 and originally titled “Une fleur, valse simple – Pensée musicale composée pour l'anniversaire de la naissance de Mlle Herminie de Alcain, par Jacques Offenbach” (“a flower, simple waltz – a musical thought composed for the birthday of Mademoiselle Herminie de Alcain by Jacques Offenbach”).