Opera Buffa in One Act 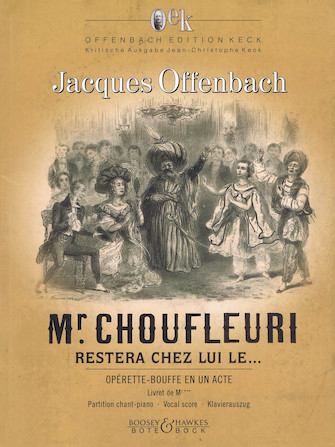 Opera Buffa in One Act

An opera buffa in one act by Offenbach, in Germany mainly known under the title of 'Salon Pritzelsberger', which has enjoyed continuous popularity since its world premiere in 1860 until the present day. Since original performance materials were lost after the death of the composer, several numbers like the overture and the legendary Trio italien could not be reconstructed in their original instrumentation. Therefore, the access to the autograph of the score granted to the editor Jean-Christophe Keck by the descendants of Offenbach was of inestimable value in order to publish this gem of opera literature in an authentic source-critical edition for the first time. In their variant of the 'Bourgeois Gentleman', Offenbach and his co-author, the Duc de Morny, President of the Ministry of Internal Affairs under Napoleon III, make fun not only of the airs and graces of the nouveaux riches but also of the musical star cult of the 19th century which apparently was hardly any different from that of today

Night of Stars and Night of Love Boosey & Hawkes Voice

Monsieur Choufleuri Restera Chez Lui Le... has been added to your cart