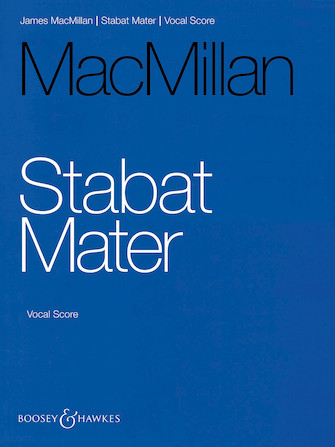 Composed in 2015, Stabat Mater was commissioned by the Genesis Foundation for Harry Christophers and The Sixteen. Scored for mixed chorus and string orchestra it is a long-awaited sequel to the early masterpiece Seven Last Words from the Cross (1993), for the same forces; indeed, the later work begins with the pianissimo 'dying breaths' with which the earlier score so unforgettably closes. Cast in four movements Stabat Mater has a duration of 53 minutes. Following the première London's Financial Times commented that the composer “speaks of a 'painful world of loss, violence, and spiritual desolation' [...]. Both sides of MacMillan are to be found here,the devotional and the painter of bold, dramatic canvases - the former in the ethereal writing for solo and ensemble voices, the latter in the lacerating blows and feverish anxieties depicted in the string ensemble.”

Stabat Mater has been added to your cart