The Passion of our Lord Jesus Christ according to John 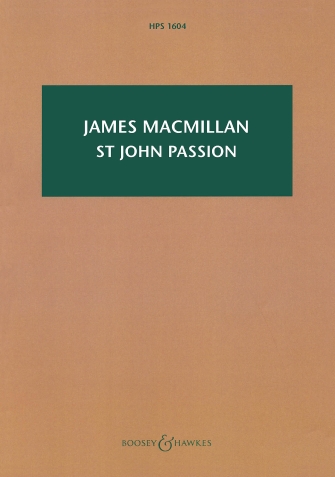 The Passion of our Lord Jesus Christ according to John

Scored for baritone solo, small 'narrator' chorus, large chorus and orchestra, MacMillans first Passion setting was composed in 2007. Lasting 87 minutes the work is divided into two parts, with 10 movements overall. As Paul Spicer has commented, “The originality of the St John Passion lies in MacMillan's ability to mix old with new, rather in the manner of Bach in his day. There are passages of sumptuous polyphony and there is a fresh look at the text where passages of Latin are interspersed with the Gospel story in English. In movement seven ('Jesus and his Mother'), MacMillan introduces not only part of the Stabat Mater but also his own words ('Lully, lulla, my dear darling'). The final movement, which is purely orchestral, is a kind of via doloroso march with a Scots lament over quite brass chords. The string writing here, with its elegiac cello lines, is deeply reminiscent of the early 20th-century English school. This should be the War Requiem of the 21st century.”

The Lamb Has Come for Us (from The House of David)

The Strathclyde Motets I

A Choral Sequence from the St John Passion

Seven Last Words from the Cross