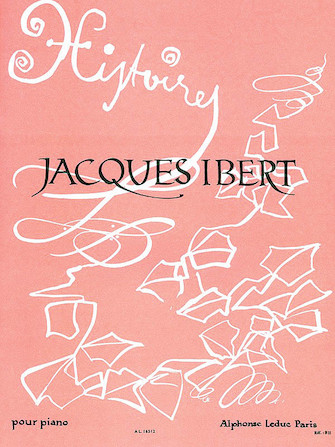 Composed between 1920 and 1921, Stories is a suite of ten short movements by Jacques Ibert (1890-1962), a neoclassical composer who won the Prix de Rome in 1919. Written for piano, this publication was commissioned by Alphonse Leduc editor and increased Jacques Ibert's popularity. The ten pieces are as follows: 1. La meneuse de tortures dor (The golden Turtle's leader) 2. Le petit âne blanc (The little white donkey) 3. Le vieux mendicant (The old beggar) 4. A Giddy girl5. Dans la maison triste (In the sad house) 6. Le palais abandonné (The abandoned palace) 7. Bajo la mesa (Under the table) 8. La cage de cristal (The crystal cage) 9. La marchande deau fraiche (The fresh water merchant) 10. Le cortège de Balkis (Balkis march). It is believed that the pieces 1, 2, 4, 8 and 10 were initially composed for 4-hand piano. Jacques Ibert (1890-1962) also composed many symphonic suites, operas and seven orchestras, including Angelique (1926) and Divertissement (1930). He also was in charge of the French Academy in the Villa Médicis (Roma) and was later administrator for the Paris Opera.

Histoires has been added to your cart

Due to high demand, Histoires is on back order