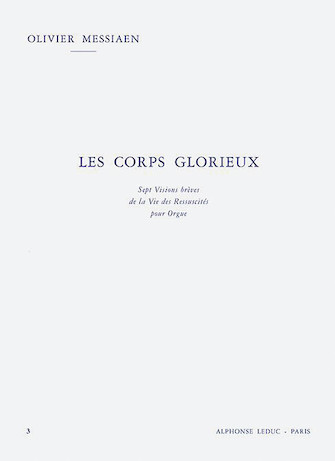 The Glorious Bodies, by Olivier Messiaen is a composition that depicts his Roman Catholic faith. Written for organ in 1939, it is a mix between Indian music and Gregorian Plainsong. This third volume includes the final three pieces of the whole composition: 5. Force et agilité des Corps Glorieux, 6. Joie et clarté des Corps Glorieux and 7. Le Mystère de la Sainte-Trinité. This piece is divided into 7 sections: 1. Subtilité des Corps Glorieux 2. Les eaux de la Grâce 3. L'ange aux parfums 4. Combat de Mort et de la Vie 5. Force et agilité des Corps Glorieux 6. Joie et clarté des Corps Glorieux 7. Le Mystère de la Sainte-Trinité. Olivier Messiaen (1908-1992) was a French organist and composer who was also passionate about ornithology and one of the most important composers of his century. Inspired by Japanese music, he had a very special way of composing, and his work can be identified by its complexity, its diatonic aspect, its harmony with limited transposition, its colour and its additive rhythms. He composed many works related to ornithology and birdsong, including the Bird Catalogue in 7 volumes and the Treatise on Rhythm, Colour and Ornithology in 7 volumes.

The Glorious Bodies – Volume 3 has been added to your cart