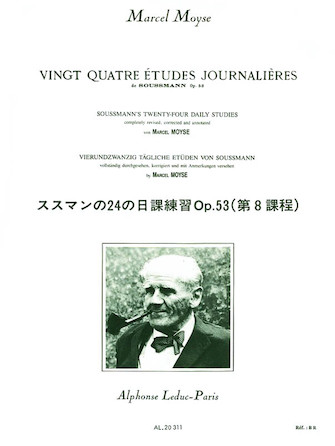 Having studied the flute with virtuosos Paul Taffanel, Adolphe Hennebains and Philippe Gaubert at the Paris Conservatoire, Marcel Moyse (1889-1984) soon became a virtuoso of the instrument himself. His editions of Soussmann's 24 Daily Studies for Flute is one of many popular study books compiled by the renowned flautist. During his career, Moyse frequently played solo flute with many orchestras, including performing the main concertos of the repertory. As well as performing and composing, Moyse was responsible for the training of a brilliant generation of flautists at the Paris Conservatoire. Following WWI, the composer moved to the United States where he continued to perform, compose and teach. It is during his time in the USA that Moyse composed his extensive number of instructive books on instrumental technique, including Soussmann's 24 Daily Studies, which today remain universally accepted and popular. Moyse's book is essential to all aspiring advanced flautists.

Vingt Quartre Etudes Journaliers de Soussman, Op. 53 has been added to your cart