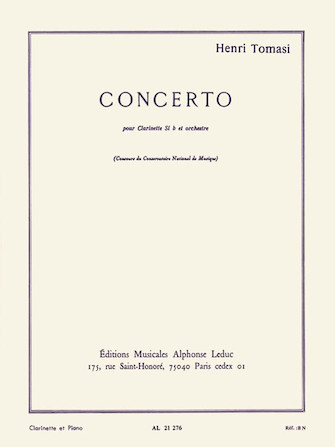 “Published in 1953, the Concerto for Clarinet and Orchestra was composed by the French composer, conductor and winner of the Grand Prix de Rome in 1927, Henri Tomasi (1901-1971). This concerto was dedicated to Ulysse Delécluse (1907-1995), a French Clarinettist known for his transcription of 'Quinze études' by J. S. Bach for the clarinet. Each of its three movements were chosen to be the examination pieces at the Paris Conservatoire, the first movement for the Examination Solo in 1953 and the second and third for the Contest Solo in 1966. This concerto begins with an unconventional start, the clarinet playing on its own and being joined later by the orchestra. It also contains some unusual material such as polychords and dissonances through the piece. Notes on this concerto by Henri Tomasi himself were written in 1957, describing the importance of the improvisation for the principal topic.”

Lament Of The Young Indian (clarinet And Piano) Leduc