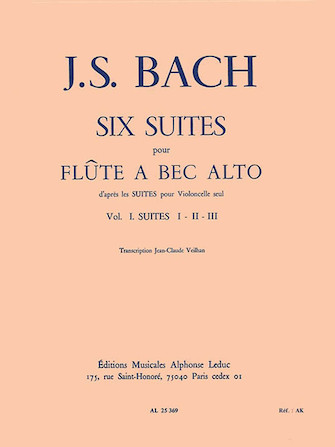 “Six Suites - Vol. 1 for Alto Recorder is the first volume of a series of two by J. S. Bach. Initially composed for Cello between 1717 and 1723, it was transcribed by Jean-Claude Veilhan and features the Suites I, II and III. The transcription keeps the original key and only some passages have to be played one octave higher than in the original sheet. The first suite, BWV 1007, is in G major and contains a Prelude, an Allemande, a Courante, a Sarabande, two Minuets and a Guigue. Its Prelude is the most famous movement of the whole set of Suites, consisting mainly of only arpeggiated chords. It can be heard in many films and is highly recognisable. The second one, BWV1008, is in D minor and held the same movements' organisation. Its prelude in two parts features a cadenza, which leads to other cadenzas in the Allemande. The Minuet part is quite technical to play. Finally, the third one, BWV 1009 in C major, sees the Minuets being replaced by Bourrées which are often played together, as a solo material. The second Bourrée only has a partial signature and the Allemande has a rhythm quite unique for the piece as it includes three semiquavers instead of one. These suites also exist arranged for Piano, for Trombone and for many other instruments.”

Ballet Music from the Court of Louis XVI