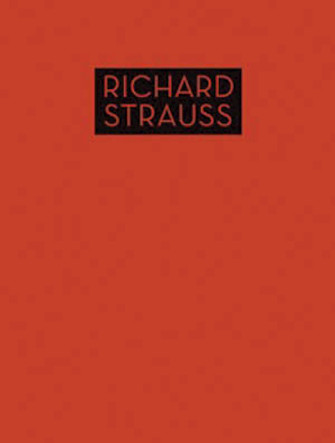 Richard Strauss (18641949), the composer of large-scale operas and tone poems, also wrote lieder throughout his life. His entire oeuvre stretching over a period of 78 years is framed by lied compositions: the Weihnachtslied dating from December 1870 (the secondentry in the chronological catalogue of Strauss's works) and the lied Malven written in November 1948 (Strausss last completed composition). His lied compositions include lieder with piano accompaniment, genuine orchestral lieder and subsequent orchestrationsof original lieder with piano. Strauss frequently conducted his own operas and orchestral works and also gave public performances ofhis lieder both as pianist and conductor. As was customary in the concert practice of the time, he combined lieder with larger-scaleworks: it was not uncommon for tone poems and lieder to appear on the same programme. Music publishing houses were active in the dissemination of Strauss lieder across the world: in the first prints, the early lieder were published in their original register, mostly only with German texts, but numerous editions were subsequently issued for other vocal registers or with additional texts in English, later also in French, Italian and Russian translations. The broad spectrum was rounded off by arrangements of lieder (such as purely instrumental piano arrangements by Max Reger and Walter Gieseking), arrangements and orchestrations by other composers andlieder albums containing collections of Strauss lieder not ordered chronologically according to their opus numbers. The fact that Strauss is to this day one of the most frequently performed composers is not only due to his operas and tone poems, but also his lieder, particularly the most treasured favourites. A number of these pieces are contained in this volume: Zueignung op. 10 No. 1,Nichts op. 10 No. 2, Die Nacht op. 10 No. 3, Allerseelen op. 10 No. 8, Ständchen op. 17 No. 2, Ruhe, meine Seele! op. 27 No. 1, Cäcilie op. 27 No. 2, Heimliche Aufforderung op. 27 No. 3, Morgen! op. 27 No. 4 and Traum durch die Dämmerung op. 29 No. 1.

Horn Concerto No. 2 in E-Flat Major