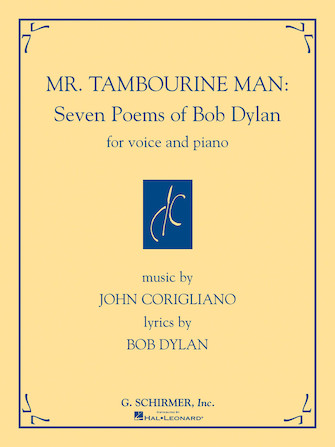 Corigliano's Mr. Tambourine Man: Seven Poems of Bob Dylan was a commission by The Carnegie Hall Corporation for Sylvia McNair and was premiered at her Carnegie Hall recital given March 15, 2002 with Martin Katz at the piano. Corigliano, who had never encountered Dylan's own musical settings of the chosen poems, has given us new musical settings of icons of American folk music from the 1960s.

The Ghosts of Versailles Vocal Score

She Was Here Boosey & Hawkes Scores/Books

Mr. Tambourine Man: Seven Poems of Bob Dylan has been added to your cart

The Ghosts of Versailles Vocal Score Add to Cart

She Was Here Boosey & Hawkes Scores/Books Add to Cart

Due to high demand, Mr. Tambourine Man: Seven Poems of Bob Dylan is on back order