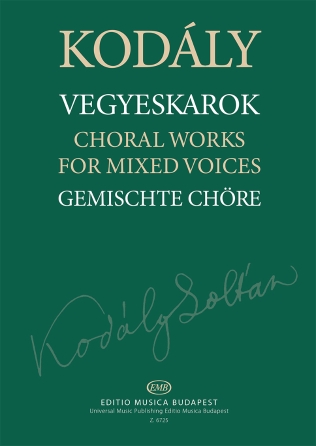 Zoltán Kodály's unaccompanied mixed choruses first appeared in print in 1943 as a collected volume published by the association Magyar Kórus. This collection contained twenty-five works. In 1951, the volume was released again in the author's edition, being expanded with eight new compositions, but without Elso áldozás (First Communion). Reprint editions of this collection had been distributed by Editio Musica Budapest until 1972, when a “commemorative extended edition” of the mixed choruses was issued, edited by Lajos Bárdos. Until now, reprints of this collection with forty-five compositions have been circulated. Péter Erdei carefully compared the printed edition with the manuscripts of the works preserved at the Kodály Archives. As a result of his work, in 2011 weemended a number of misprints, including those that had been inherited since the earliest print.

Seventy-five years after the first release, the time has come for Kodály's collected choral works for mixed voices to appear in a completely new, expanded edition. Our collection contains six compositions that were not included in earlier editions: Jövel, Szentlélek Úristen (Come, Holy Spirit), Miatyánk (The Lords Prayer), Miserere, Salló Pista, Semmit ne bánkódjál (Do Not Grieve), Újesztendot köszönto (A Christmas Carol). In addition, two versions - both equally authentic - are published of the work known underthe title of Naphimnusz (Canticle of the Sun), due to earlier editions; the new release comes with lyrics in Hebrew and English (Adoration), as well as Dénes Szedos Hungarian translation (Napének [Hymn of the Sun]). This is the most complete and most authentic edition of Kodály's mixed choruses to date; it is printed in a slightly larger format than previous editions, and it contains new easily-legible music scores and an informative epilogue.