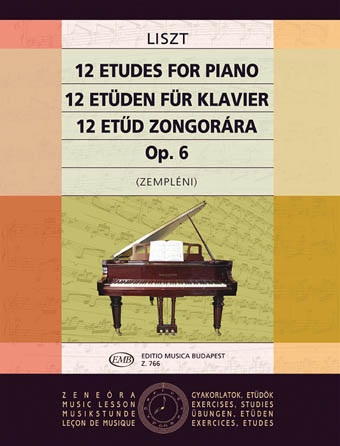 Liszt first composed these etudes at 14 years old in the year 1825. Just 25 years later, after being revised repeatedly, they appeared under the title of Transcendental Etudes (12 Études dexécution transcendante).

This edition has found a place among the renewed publications in our Music Lesson series, and it features revised fingerings, performer's notes, and a preface all written by pianist Kornél Zempléni. He believed that Liszt's Op. 6 serves as the ideal introduction into the technique and musical elements needed for students to successfully study the Transcendental Etudes. Regarding the 12 Etudes for Piano, Zempléni had this to say: “With this publication we hope to contribute something both to the advancement of the young pianist and to the increased appreciation of Liszt's art.”

Liszt's 12 Etudes has been renumbered as his Op. 6 according to the most recent research, but in terms of content this publication corresponds with the volume which was formerly labeled as his Op. 1. (catalogue number Z. 766).

Twelve Etudes Op. 6 has been added to your cart