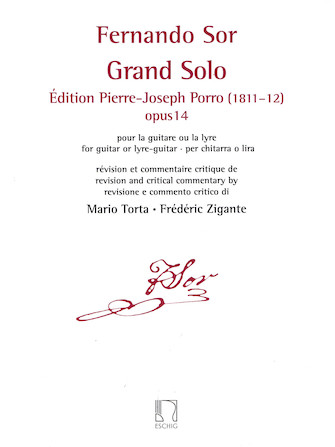 The Grand Solo pour la guitare ou la lyre by Fernando Sor (1778-1839) is one of this Catalan composers best-known and most frequently performed works for the guitar. Since its very first edition (1810-11) the piece has been the subject of multiple versions and revisions, many of them published. This volume presents one of the earliest of these, published in Paris between 1811 and 1812 by the guitarist and publisher Pierre-Joseph Porro, an exemplar of which was discovered in the 1980s and which now appears for the first time in a modern edition, accompanied by a facsimile of the original publication upon which it is based. With its own distinctly detailed and informative notation, the Porro edition of the Grand Solo represents a fundamental stage in the evolution of this immensely popular piece.

20 Studies for the Guitar Guitar Method

Variations on a Theme of Mozart, Op. 9 Schott

Introduction and Variations on a Theme of Mozart, Op. 9 Schott

20 Studies for the Guitar Guitar Method Add to Cart

Variations on a Theme of Mozart, Op. 9 Schott Add to Cart

The Best of Fernando Sor Editions Durand Add to Cart

Introduction and Variations on a Theme of Mozart, Op. 9 Schott Add to Cart