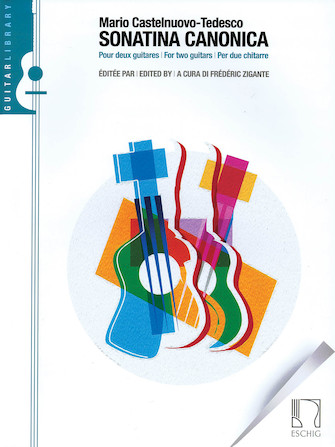 Composed in 1961 for the legendary guitar duo formed by Ida Presti (1924-1967) and Alexandre Lagoya (1929-1999). It was the first episode of a collaboration which led to a rich series of fine works. Conceived as a canon, the three movements in the Sonatina are a veiled homage to Domenico Scarlatti and his harpsichord music in the Spanish idiom. We have adopted Castelnuovo-Tedesco's original score, carefully reproducing all the many annotations and indications found in the manuscripts.

“The outer movements are full of energy and excitement, with striking new melodies suddenly and unexpectedly making an appearance amidst all the pyrotechnics. The middle movement shows Castelnuovo-Tedesco at his lyrical best in a gorgeous and emotionally moving Siciliana.” –Classical Guitar

Sonata for Cornet and Piano, Op. 18

Symphony for Organ and Orchestra