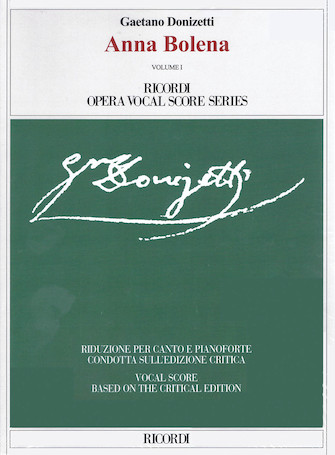 Vocal score based on the critical edition of the orchestral score edited by Paolo Fabbri, 2 volumes. Donizetti's Anna Bolena premiered at Milano's Teatro Carcano during Carnival season 1830-31 is considered the composer's first major success in serious opera, which brought him to the attention of all Europe. In terms of production, in Italy he was an anomaly, in that he remained actively involved in the evolution of his works and the performances of them, and went on making modifications to those works. Written expressly for the interpretative and vocal talents of great singers like Giuditta Pasta and Giovan Battista Rubini, the historically-based lyrical tragedy by librettist Felice Romani is a classic of Lombard Romanticism. The present reduction for voice and piano derives from the critical edition of the score, recently published in this catalog: is based on the autograph score, (housed in the Ricordi Archives in Milan), on the libretto for the premiere, on the first vocal scores printed editions (Lucca and Ricordi in Milan and Marquerie Frères in Paris) and additional manuscript scores with autograph additional notes (housed in Naples and Rome). This edition presents for the first time all the music composed by Donizetti, in particular the sections crossed out or replaced either immediately before or after the first performances. There is also a synthetic reconstruction of the birth of Anna Bolena, with a description of sources and a selection of the Critical Notes from the full score edition.

Anna Bolena has been added to your cart

Due to high demand, Anna Bolena is on back order